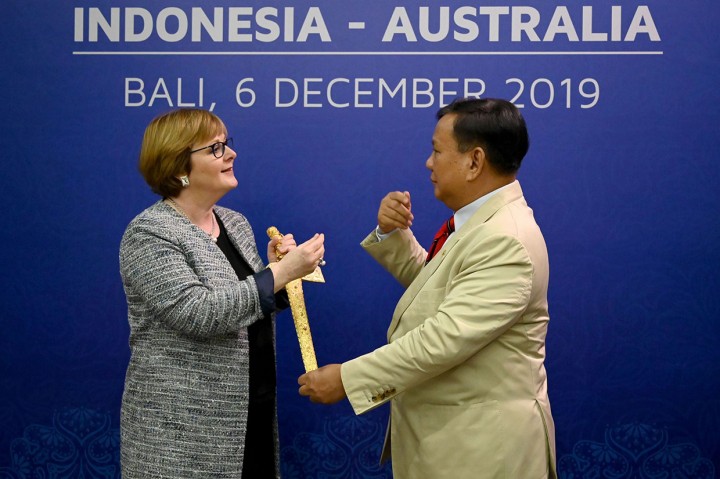 By: Ross B Taylor

Prabowo Subianto met with US secretary of defence, Mark Esper to discuss regional security and defence issues, but the trip highlights the diplomatic challenges for Australia given the former lieutenant-general’s history, and plans for his own future within Indonesia’s political system.

In 1998, Prabowo was dishonourably discharged from the Indonesian military following alleged atrocities in East Timor, and for allegedly kidnapping and torturing pro-democracy activists as a lead-up to the overthrow of then President Suharto. None of these alleged offences were never proven in court within Indonesia but, based on strong evidence, did result in the US black-banning Prabowo from travelling to the US; a ban that was supported by Australia who implemented a similar ban for any travel to Australia until 2014, when in anticipation that the former Suharto strong-man may have won the presidential election, officials quietly removed any restrictions.

Prabowo failed to win the presidential election in 2014, but only just in narrowly losing to the current incumbent, Joko ‘Jokowi’ Widodo. Last year Prabowo once again failed to oust Jokowi, this time by a slightly higher margin but still maintaining widespread support amongst military personnel and many everyday kampung or village voters who yearned for a return of the ‘disciplined’ days of Suharto.

Jokowi, only too aware of the popularity of Prabowo despite his dark past – and as only could happen in Indonesia – not only offered Prabowo a senior position within the new cabinet, but handed to him the critically important defence portfolio. It was a risky play by the president and one that most observers agreed would prove a masterstroke by nullifying his main opponent, or completely blow-up in Jokowi’s face.

Prabowo is known for his often violent and temperamental moods, but despite the flaw in his personality, this former general is savvy, intelligent, strong and a strategic thinker. He also speaks fluent English and unlike his president, feels very comfortable in dealing with powerful people from western countries.

With one-eye on the 2024 election, to date Prabowo has proven to be a very effective defence minister, courting both Russia and also China, despite his deep reservations about what plans the Chinese leadership may have for the region. In many respects Indonesia and Australia share similar challenges with regards to China, with both countries being heavily dependent economically on China, whilst both having serious misgivings about China’s political intentions throughout the region.

Prabowo’s invitation to visit the US – and the removal of his travel ban – also has much to do with the US position on China, and the need to have an Indonesia that still embraces the US role in our region. Pragmatism prevails within the Trump administration when it comes to his nation’s plans for the Indo-Pacific region, and Prabowo understands this.

So where does this leave Australia given that whilst having no official ban on Prabowo, have considerable suspicions as to how this man would behave should he seek a third try for the presidency in 2024 – something that is highly likely given Jokowi’s term must end – and possibly delivering to Prabowo his ultimate goal of leading his nation?

Four years is still a long-way off, but a Prabowo presidency would certainly make the bi-lateral relationship with Australia more visible given that foreign affairs has hardly mattered to Jokowi. But it may also mean a more volatile and demanding relationship than Australia has faced under the previous Indonesian president Susilo Bambang Yudhoyono and now, with Joko Widodo.

In the meantime however, Prabowo Subianto remains a powerful figure within Indonesia and the region and therefore as the bi-annual Australia-Indonesia foreign & defence minister’s meeting approaches next year, following the American lead in overlooking Prabowo’s dark and questionable past maybe unavoidable. To do so will risk outrage from human rights activists, but the reality may be that given Australia has already ‘boxed-itself-in’ to an ongoing strained and sometimes bitter relationship with China, we simply cannot afford to also alienate a nationalistic and more autocratic Indonesia at a time when our region is facing increased instability and an uncertain future.