Indonesia was in denial over coronavirus. Now it may be facing a looming disaster 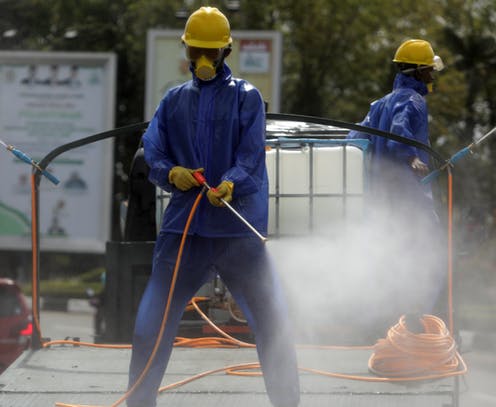 Almost no one thinks Indonesia is handling the COVID-19 pandemic well.

Until early March, the government claimed it had no cases of infection, something the eccentric health minister, Terawan Agus Putranto, attributed to prayer. The home affairs minister urged the public to eat more bean sprouts and broccoli, while President Joko Widodo (Jokowi) sang the praises of jamu, traditional herbal remedies.

The government had been in denial. Terawan dismissed as “insulting” a report by Harvard University researchers saying Indonesia must have unreported cases. As recently as last Friday, another minister was still arguing the virus cannot survive in tropical climates.

Jokowi was apparently more concerned about the threat the virus posed to trade, investment and tourism. In February, when many countries were imposing tough travel restrictions, he planned to offer discounts of up to 30% to attract tourists. His government even allocated almost A$8 million to pay social media influencers for tourism promotions.

On March 2, Indonesia finally acknowledged COVID-19 had reached the archipelago. Jokowi admitted, as many suspected, his government had withheld information from the public “to avoid panic”.

And then it finally began to act. The government banned mass gatherings, imposed so-called “large-scale social restrictions” and barred foreigners from entering the country. It announced it will release 30,000 prisoners from the country’s notoriously overcrowded and unhealthy prisons and will spend an additional A$40 billion on medical needs, social support and relief for small and medium businesses

Last week, Jokowi even toyed with the idea of declaring a civil emergency (similar to martial law) before quickly backtracking.

Foreign travelers lined up outside a visa office in Bali last month. MADE NAGI/EPA

Just how bad is the situation?

It is not hard to see why Jokowi finally admitted what most Indonesians guessed long ago, but we still don’t have all the facts.

Indonesia has recorded more than 2,400 infections and 209 deaths, but these figures are based on just 11,500 tests, a tiny sample in a nation of nearly 270 million.

There are indications many cases and deaths are going undetected. Reuters examined data from Jakarta’s Department of Parks and Cemeteries and found 4,400 burials were conducted in the province in March, an increase of 40% above normal levels.

But even by the conservative official figures, the mortality rate of 9% is one of the highest in the world, although this could be because of insufficient testing.

In any case, scientists at the University of Indonesia have predicted that if stricter measures do not start immediately, the situation could spin out of control, with up to 240,000 deaths by the end of April.

The government is scrambling to prepare its health system to cope, but this looks like an impossible task. Indonesia has just four doctors and 12 hospital beds per 10,000 people, and less than three intensive care beds per 100,000. These levels are way below World Health Organisation or Asia-Pacific standards.

An extreme shortage of ventilators will likely result in many avoidable deaths, especially in regional areas.

A specialist COVID-19 hospital has been opened in Jakarta, and the old Vietnamese refugee camp on Galang Island is being refurbished to create another.

But it will take a lot more than this if hundreds of thousands are infected – not least because Indonesia is a respiratory disease tinderbox. It has one of the highest proportions of male smokers in the world, and its five leading causes of death are all tobacco-related. The bad relations between the Ministry of Health and doctors won’t help either.

There is also a serious lack of protective equipment for health care workers. Some have been told they can turn up to work in raincoats. At least 24 doctors have died so far, about 11% of all recorded deaths.

Even social isolation will be extraordinarily difficult in such a densely populated country with a laissez-faire attitude to rules and a tradition of bribing police. Moreover, up to 70% of the workforce is employed in the informal sector and many live hand-to-mouth. Working from home may simply not be an option for them.

To make matters worse, millions have been preparing for mudik, the traditional visit home for Muslims in the lead-up to the Idul Fitri (Eid) celebration on May 23. Last year, more than 18 million Indonesians travelled during this time. It is hard to imagine an event more likely to trigger a catastrophic outbreak.

Jokowi has warned of the dangers of mudik, but seems reluctant to take tough measures to prevent it.

He is in no-win situation. If he does ban mudik he will be a target for criticism from political enemies who like to portray him as an insincere Muslim. If he doesn’t, he will be attacked for exposing millions to the virus.

Already, Anies Baswedan, the high-profile governor of Jakarta, has criticised Jokowi’s handling of the crisis, calling for much tougher measures to reduce the spread of the virus.

But Jokowi appears to have again put economic considerations before public health, opting instead for “large-scale social restrictions” rather than quarantines or banning mudik outright.

Stricter regional quarantines or lockdowns would undoubtedly depress economic activity. What’s more, under the 2018 Health Quarantine Law, the government would then incur the huge costs of being responsible for all the basic needs of citizens in those areas.

It would also concern Jokowi that the virus has triggered an outburst of anti-Chinese hate speech, never far below the surface in Indonesia. Online trolls are accusing the Chinese of introducing the virus to Indonesia and wealthier Chinese of fleeing to the safety of Singapore. There have already been violent protests against Chinese workers in a number of locations.

Jokowi has now brought in the police, armed forces and national intelligence agency to help manage the crisis. This is in line with the creeping securitisation that has marked Jokowi’s rule, and these agencies will take any opportunity to gain a greater foothold.

But it also suggests Jokowi is aware of the political dangers COVID-19 may create for him. Worryingly, the police seem more concerned with chasing down the president’s online critics than taking actions that might help to prevent the spread of the virus.

The Indonesian government has a mess on its hands – one largely of its own making. Sadly, its people will likely pay a very high price for the months its leaders spent denying the obvious.